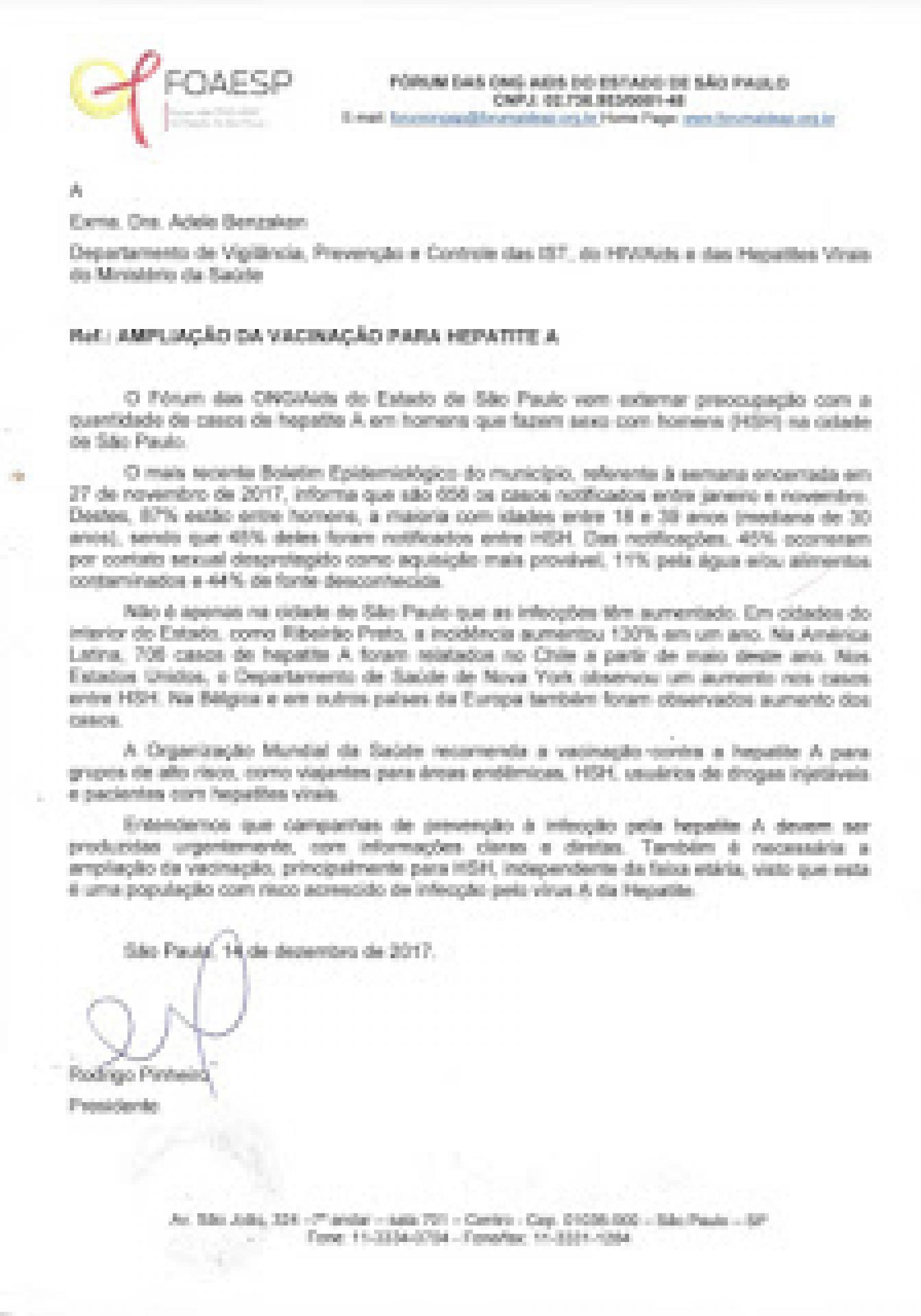 FOAESP calls for expansion of Hepatitis A vaccination coverage

The State of São Paulo Forum on HIV/Aids (FOAESP) sent an official letter to the Ministry of Health Department of STI, AIDS and Viral Hepatitis, for the increasing of the coverage for the Hepatitis A immunization. The HAV has been spreading over the population worldwide. Read the document below.

To
Mrs. Adele Benzaken
Department of Surveillance Prevention and Control of STI, HIV/AIDS and Viral Hepatitis
The Ministry of Health

Ref.: EXPANSION OF HEPATITIS A VACCINATION COVERAGE
The State of São Paulo Forum on NGO/AIDS (FOAESP) exposes its concern on the number of cases of hepatitis A among men who have sex with men (MSM) in the city of São Paulo.
The most recent city’s Epidemiological Bulletin, concluded on November 27, 2017, indicates 656 notified cases from January to November. Among them, 87% are men, most of them aged 18-39 (median age of 30), and 45% of these cases are from the MSM group. From the cases forwarded, 45% the transmission most probably happened via unsafe sex, 11% through water or food contamination and 44% the contamination cause is unknown.
Not only in the city of São Paulo is the infection spreading, but so it is in the State countryside, as in Ribeirão Preto, where the incidence increased 130% in one year. In Latin America, 706 cases of Hepatitis A have been reported in Chile from last May on. In the USA, the New York Healthcare Department has observed the rise of the number of cases among MSM. Belgium and other European countries also have detected the increase of cases.
The World Health Organization recommends vaccine against hepatitis A for individuals who belong to high-risk groups, as people who are traveling to endemic areas, MSM, injectable drug users and patients with viral hepatitis.
We perceive the urgency on promoting prevention campaigns against hepatitis A, those containing clear and direct information. Increasing vaccination is also necessary, first and foremost for MSM, regardless of their age, since this population is at increased risk of Hepatitis A infection.
São Paulo, December 14, 2017.
Rodrigo Pinheiro
President