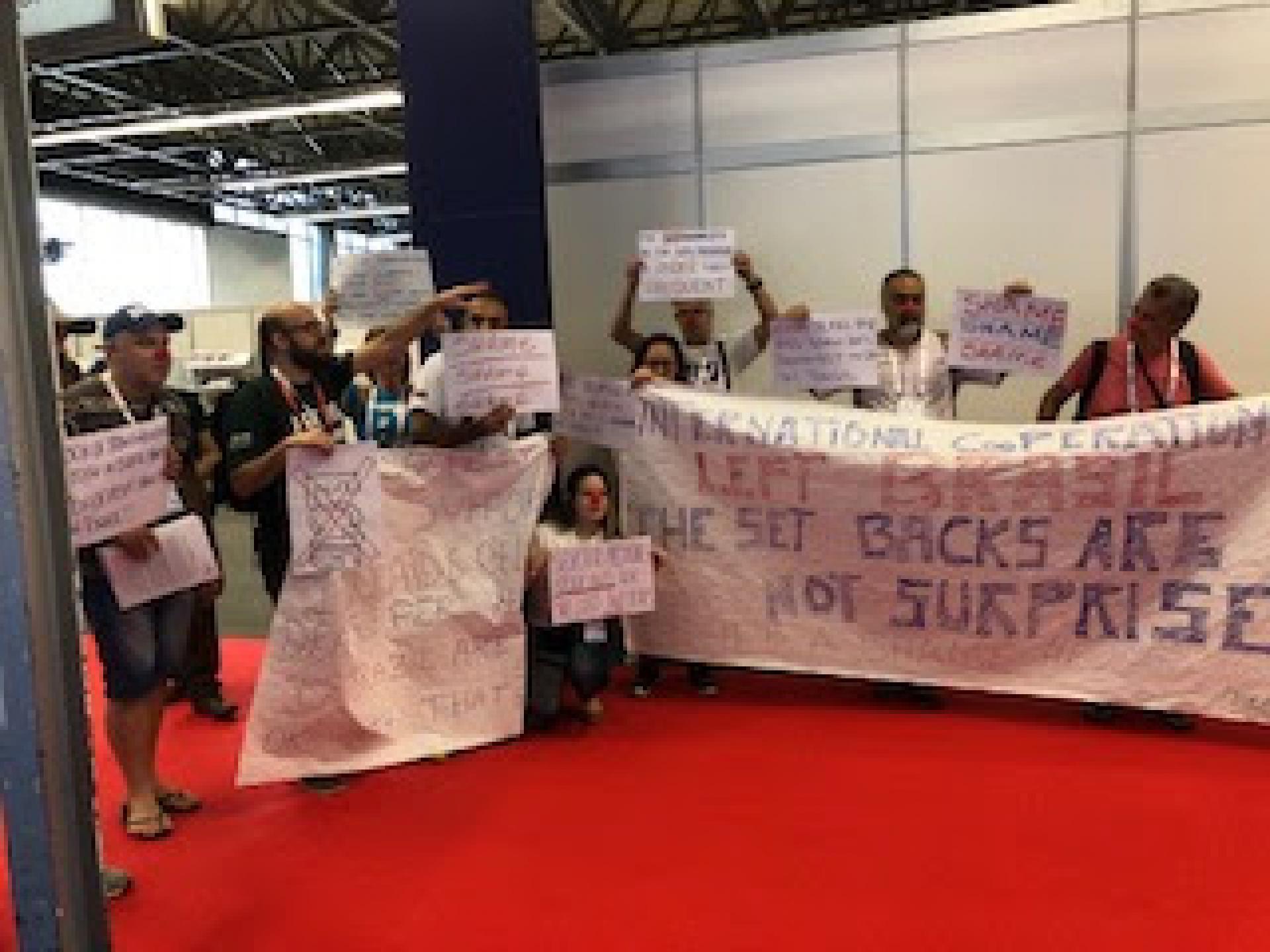 At least twice, in the international AIDS Conference (AIDS2018) in Amsterdam, Brazilian activists took part at protests against the dismantlement of the Brazilian Unified Health System (SUS), as the national government has been done, begging to the Global Community to look after the country again and to help them on the the access to generic drugs to treat hepatitis C.
Around 10am on July 25th, in Amsterdam, a Brazilian group, shouting “shame”, walked through the 22nd International AIDS Conference in Amsterdam’s exhibitors area  – countries and pharmaceutical industry stands- until the Brazilian stand, carrying banners in English denouncing the general dismantlement of SUS and the response of the national government to the AIDS epidemic.
The banners read: “30% of transsexual beings in Brazil live with AIDS. We need health policy improvement”; “We face lack of medicine over the last years”, denouncing the ordinary lack of antiretroviral stock; “The Unified Health System is suffering dismantlement”; “The Civil Society shouts for Help! The AIDS mortality rate is around 15 thousand deaths per year. Are you okay with that?”.

The chairwoman of the Ministry of Health Department on STD, AIDS and Viral Hepatitis, Adele Benzaken, heard the protest from the Brazilian stand, as it was already expected. The activist Jorge Beloqui, from GIV (Life Support Group), asked the government a stronger commitment to guarantee universal access on the treatment of hepatitis C.
“We are complaining first and foremost against the lack of antiretroviral stocks in Brazil. The issue has preoccupied different states of the country. The government must buy medicine, including those used on the treatment of hepatitis C. After the purchase of generic sofosbuvir, we hope more people have access to the treatment as the price must get low”, said the activist.
During the rally, protesters distributed to other world representatives, a National Articulation Against AIDS (Anaids) public letter, pointing out the faults of the current Brazilian heath policy administration, “The Brazilian heath situation is unclear, since we strongly face desinterestedness, disinvestment and dismantling of SUS, and the predictions are reinforced through the law approved by the House of Representatives (Constitutional Amendment 95), that freezes federal spending for the next two decades. The facts confirm how severe is the crisis on the Brazilian response to AIDS, once considered a global example on the fight against HIV”, said the letter. 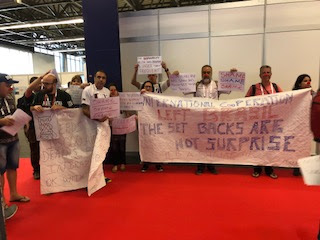 “At the same time, in many countries, including Brazil, it is observed the epidemic rising, reinforced by the advance of conservative and fundamentalist agendas, that deeps vulnerability and social stigmas. As a consequence, population historically marginalized (LGBTI), women, youths, indigenous, migrants, drug users, sex workers, homeless people, prison population, among others, have their rights violated and are victims of daily prejudice", says the document.
In response of the arguments, the head of DIAHV explained that the Government and the Civil Society have partnership. “We expect the Civil Society might help us to obtain cheaper generic drugs and give us support to the Hepatitis C Eradication Plan. As you must agree the support of the Civil Society was crucial to get generic sofosbuvir on the treatment of hepatitis C. Days before, we have taken an important step beyond negotiations with the pharmaceutical industry and could save R$ 1 billion per 50 thousand treatments. I only want to make clear that shortage of medicines was never a problem, the obstacles were at the custom clearance and manufacturing of some medicine which ended in delivery delay, but it has already been solved”, she said.
Joining her, they are the Deputy Director of the Department, Renato Girade, and Gil Casimiro, responsible for the Coordination on Policy and Prevention with Civil Society.
Alexandra Nilo, from Gestos NGO, told that “in the last few years it could be observed the International Cooperation closing the doors to Brazil. It is important their return with support to the NGOs since they need to be strong enough keep helping and doing the advocacy work. It is an opportunity to show we worry about the departure of the International Cooperation. The National Government must also consider starting support again as the human rights agenda must be moved forward. The National Government has been taken wrong decisions related to these subjects”.
The director reaffirmed that the “The Ministry of Heath always kept partnership with the Civil Society, financing projects as also some researches linked to the subject. The compromise goes on, having several calls for funding, aiming a stronger civil society. So thank you all, you are always welcome. I hope we keep working together". 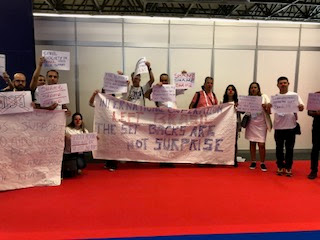 On their defense, while the protesters showed up the obscure situation of Health policy in Brazil, the Ministry of Health Official Stand exposed messages representing their position telling that “The SUS path was and will always be made based on dialogue” and “The Ministry of Health gives support and understand ever kind of complaint".
The protest lasted up around half an hour and other country delegation of the world kept their attention on this insatisfaction situation in Brazil. The protest had finished at the Global Village.
Advocacy
At 1 pm, part of Brazilian activists joined other global ones to visit pharmaceutical industry stands. At Gilead Science’s stand, Brazilian protesters exposed the policy articulation of the company, that is pushing the Ministry of Health to keep acquiring sofosbuvir from the company, that the country must pay U$ 4,200 per treatment.